A Day in the Life of Magic Wanda 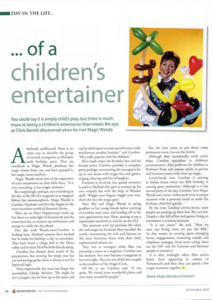 You could say it is simply child’s play, but there is much
more to being a children’s entertainer than meets the eye,
as Chris Barrett discovered when he met Magic Wanda.

Absolutely spellbound! There is no other way to describe the group of excited youngsters at Michael’s sixth birthday party. They are transfixed as Magic Wanda produces her magic sweets from, yes, you have guessed it, her magic sweet machine.

Magic Wanda never tires of the expression of utter amazement on their little faces. “It is very rewarding, a true magic moment.”

But surprisingly, perhaps, not everything in the day in the life of a magician is so magical. Before her metamorphosis, Magic Wanda is Caroline Vandome and her day begins in the more mundane world of domestic duties.

There are no Mary Poppins-type tricks up her sleeve to make light of housework and she sometimes has to conjure up enthusiasm and energy to tackle the day ahead.

Our day with Wanda-cum-Caroline is looking busy. Michael’s parents have booked her to make his birthday a day to remember. They have hired a village hall in the Meon Valley and invited 20 of his little friends along.

Caroline has already done much of the preparation, but stowing her props into her car and setting up her show is always a test for logistical logic.

Most importantly she must not forget her accomplice, Cheeky Monkey. “He might be just a puppet, but he lives up to his name and can be relied upon to come up with some really mischievous monkey business,” said Caroline. “He’s really popular with the children.”

All is ready when the birthday boy and his friends arrive. Caroline provides a complete party package, entertaining the youngsters for up to two hours with magic fun and games, singing, dancing and lots of laughter.

Everyone is involved, but special attention is paid to Michael who gets to conjure up his own wizard’s hat with the help of Wanda’s spell: ‘Wiggle your fingers, wiggle your toes, that’s the way the magic goes.’

Time flies and Magic Wanda is saying goodbye to her young friends before reverting to Caroline once more and heading off to her next appointment near Alton, pausing to eat a supermarket sandwich in a lay by on the A32.

This contrasts with her previous life when she and magician husband Alan travelled the world, entertaining the rich and famous on the most luxurious liners with their slick, sophisticated cabaret act.

They met as teenagers while Alan was pursuing a career as a magician. Caroline was his assistant, but soon became a magician in her own right. They are one of the few couples to be members of the Magic Circle.

Of life at sea, Caroline said: “It was great. We visited some wonderful places and met many wonderful people.”

But the time came to put down some permanent roots, Lee-on-the-Solent.

Although they occasionally work cruise ships, Caroline specialises in children’s entertainment. Alan performs for children as Professor Potty and amazes adults at private and business events with close-up magic.

Lunch-break over, Caroline is arriving at Sasha’s house where her fifth birthday is causing great excitement. Although it is her second party of the day, Caroline, now Magic Wanda once more, makes each event a unique occasion with a personal touch to make the birthday child feel special.

By the time Caroline arrives home, most people are putting up their feet. But not her. Despite a day full of fun and games, being an entertainer is a serious business.

“It is our career,” she said. “How we earn our living… how we pay the bills.” So that means an evening spent arranging future engagements, answering e-mails and telephone messages. Even more taxing, there are the VAT and the Customs and Revenue people to attend to.

It is after midnight when Alan arrives home from appearing in cabaret in Portsmouth and then they can spend a few magic moments together.

Any cookies that may not be particularly necessary for the website to function and is used specifically to collect user personal data via analytics, ads, other embedded contents are termed as non-necessary cookies. It is mandatory to procure user consent prior to running these cookies on your website.